The Show Will Go On 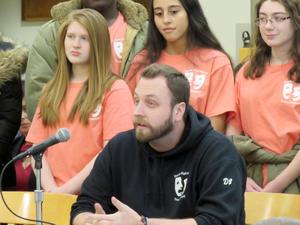 The Everett High School Theatre Company advanced to the semifinal round of the Massachusetts High School Drama Festival after its strong showing in Saturday's preliminary-round competition at Hanover High School.

EHS will next perform in the semifinals on Saturday, March 14 at 10:30 a.m. at Brockton High School.

Under the leadership of Artistic Director Evan DeMarzo, the EHS Theatre Company performed the one-act play, "Augusta & Noble" by Carlos Murillo. It was one of the strongest showings the school has ever had in the Drama Festival, as evidenced by the following awards the company brought back to EHS:

Excellence in Acting, for the Role of Gabi Castillo — Jhalyshka Feliciano (pictured above)

Excellence in Acting, for the role of Jesus Castillo — Phillip Fonseca

The preliminary round was held at 14 locations across the Commonwealth. EHS was one of eight schools to perform at Hanover High and one of three (along with Weymouth High and Boston Latin) to earn an invitation to the semifinals.

The Massachusetts High School Drama Festival is a competitive program that includes 112 one-act plays produced by member high schools. The competition is organized across three levels – preliminary, semi-final and State Finals. Student excellence in acting and technical design is recognized at each level. Of the 112 one-act plays that enter the festival, fourteen will be selected as State Finalists, of which three will be named winners. Two schools chosen from the State Finalists will go on to represent Massachusetts in the New England Drama Festival, the regional showcase of secondary school theatre.

In "Augusta and Noble," the audience meets Gabi, a 12-year-old girl who has lived her whole life amid a vibrant Latino community in Chicago. Gabi is starting high school across the city at Northside College Prep, where she is quickly exposed to new people and possibilities. As Gabi begins asking questions about her heritage, including the truth about her parents' harrowing journey across the border to the United States, she struggles to discover exactly where in this world she belongs. Told in English peppered with Spanish, this play for young audiences celebrates the rich history and resilience of the many immigrants who call Chicago home.