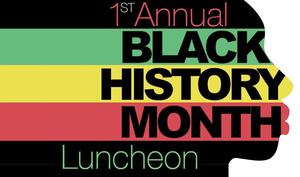 Mayor DeMaria presented the awards to Easy and Chamblain. He spoke passionately about their contributions to our students and the city as a whole. In accepting the awards, Easy and Chamblain talked about what Black History Month means to them and the positive ways in which Everett has shaped their lives. They also paid special tributes to their mothers, who were in attendance and received standing ovations from the audience.

Dr. Easy is an Assistant Principal in charge of the Academies of Everett, while Chamblain is a guidance counselor and the head coach of the Crimson Tide boys basketball team. Both are EHS graduates and inspirations to their students. Club members Briana Delarosa and Shani Headley introduced Easy and Chamblain, respectively. They spoke eloquently about the impact these educators have made in their lives and those of their classmates.

The luncheon began with a stirring rendition of the Black National Anthem, “Lift Every Voice and Sing” by Diacha Eugene, Darren Pierre, and Lucia Seide. The meal, featuring Cajun chicken and peach cobbler, was prepared and served by the faculty and students of the EHS Culinary Arts Department.