Everett High School is planning to begin its winter athletic season next month, with interscholastic games scheduled to start on March 1, under the details of a new timeline released by the Greater Boston League (GBL). This is dependent upon a final approval by the Everett Board of Health later this month.

Everett High School (EHS) will begin tryouts and preseason training on Monday, February 1 for boys and girls basketball and coed hockey. Games will be played between March 1 and April 10. (The MIAA will not hold any state tournaments during this school year.)

EHS students are reminded to submit a current physical and any necessary paperwork to Athletic Director Tammy Turner as soon as possible.

Everett is joined in the GBL by existing members Malden, Medford, Revere, and Somerville. Lynn English, Lynn Classical and Chelsea high schools will officially join the league in September of 2021, but they will be included in the GBL’s sports schedules this year.

“I continue to be impressed with, and have full confidence in, the collective effort to allow our student athletes to play the sports they love,” said EPS Superintendent Priya Tahiliani. “It has been a long process filled with stops and starts, but it is worth it because we know the profound social and emotional benefits sports offer.”

Looking ahead, the GBL is planning to hold a Fall 2 season from April 12 through May 15. For Everett, this includes football, volleyball, boys and girls soccer, golf, cross country, and field hockey. Athletes who compete in these sports will be allowed to participate in preseason conditioning and training during the winter season.

The year will conclude with a spring season from May 17 through July 3. The Crimson Tide will compete in baseball, softball, tennis, lacrosse, outdoor track, and crew. Athletes who compete in these sports will be allowed to participate in preseason conditioning and training during the Fall 2 season.

GBL athletic directors and trainers, in collaboration with the Massachusetts Interscholastic Athletic Association and medical professionals, have already established exhaustive Covid-19 guidelines and protocols for practice sessions and games. This includes a series of on-field rules that enhance player safety, restrictions on fans, social distancing on bench areas, and face coverings. This plan was approved by the Everett School Committee last month.

In the coming days and weeks, trainers and coaches will research and implement  ways in which athletes can best prepare for the for interscholastic competitions after as long as a one-year hiatus. Meanwhile, GBL athletic directors will finalize any outstanding details about its restructured athletic seasons, all of which will be shared as soon as possible. 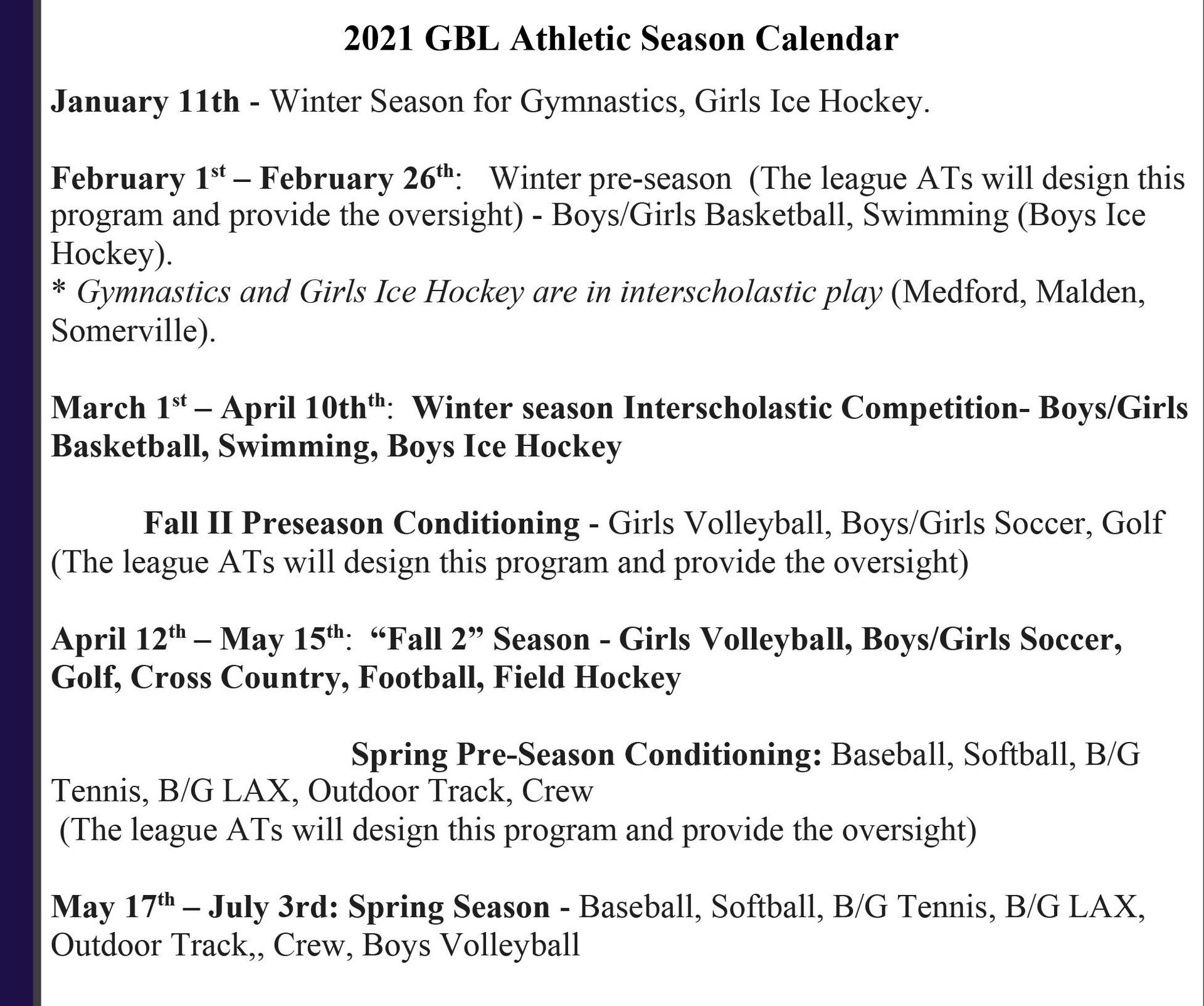