COVID-19 has and doesn’t appear to be leaving anytime soon, and more than ever we must push back by teaching this pandemic a lesson. Easier said than done when so much of our community recently has been in quarantine or has escaped quarantine. If there is any fight left after a battle with COVID-19, I offer 19 items to add to your Education on Fire COVID-19 toolbox. Here are the first 10..

Give it a shot…. Send us feedback!

February is Black History Month in the United States and Canada. Since 1976, the month has been designated to remember the contributions of people of the African diaspora.

February 1:  Lunar New Year, one of the most sacred of all traditional Chinese holidays, a time of family reunion and celebration. The Lunar New Year is also celebrated at this time in Japan, Korea, Vietnam, and Mongolia.

February 1: National Freedom Day, which celebrates the signing of the Thirteenth Amendment, which abolished slavery in the United States in 1865

February 3:  Setsubun-Sai (Beginning of Spring), the day before the beginning of spring in Japan, celebrated annually as part of the Spring Festival

February 5:  Vasant Panchami, the Hindu festival that highlights the coming of spring. On this day, Hindus worship Saraswati Devi, the goddess of wisdom, knowledge, music, art, and culture.

February 15:  Lantern Festival, the first significant feast after the Chinese New Year; participants enjoy watching paper lanterns illuminate the sky on the night of the event

February 15:  Parinirvana Day (or Nirvana Day), the commemoration of Buddha’s death at the age of 80, when he reached the zenith of Nirvana;

February 16:  Maghi-Purnima, a Hindu festival especially for worshippers of Lord Vishnu. Devotees take a holy bath on this day and also carry out charity work.

February 16: Magha Puja Day (also known as Maka Bucha), a Buddhist holiday that marks an event early in the Buddha’s teaching life when a group of 1,250 enlightened saints ordained by the Buddha gathered to pay their respect to him. It is celebrated on various dates in different countries.

February 21:  Presidents Day, a federally recognized celebration in the United States that honors the birthdays of George Washington and Abraham Lincoln birthday, as well as those of every US president

February 25–March 1: Intercalary Days or Ayyám-i-Há, celebrated by people of the Bahá’í faith. At this time, days are added to the Bahá’í calendar to maintain their solar calendar. Intercalary days are observed with gift-giving, special acts of charity, and preparation for the fasting that precedes the New Year.

February 27:  Meatfare Sunday (The Sunday of the Last Judgment), traditionally the last day of eating meat before Easter for Orthodox Christians 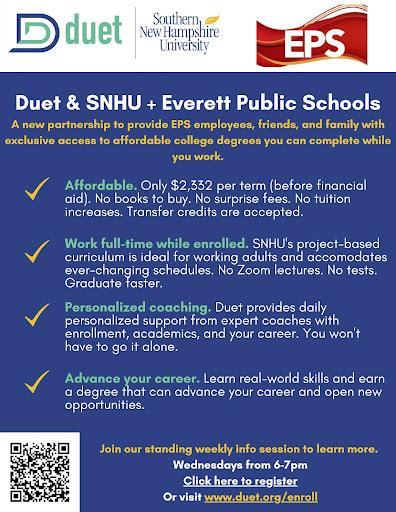 We are pleased to announce our partnership with Duet. Educators, family members and students who are seeking a bachelors in Communications, Business Management and Healthcare Management are eligible with a discounted rate for members of the EPS community. Along with the bachelors program, Duet has created an educator pathway for eligible students and adults. Duet provides quality coaching, counseling and post graduation career support all for the most affordable price in the Northeast. If you are interested in this opportunity, please feel free to contact me, attend a zoom meeting or email our contact Amanda Bernasconi. 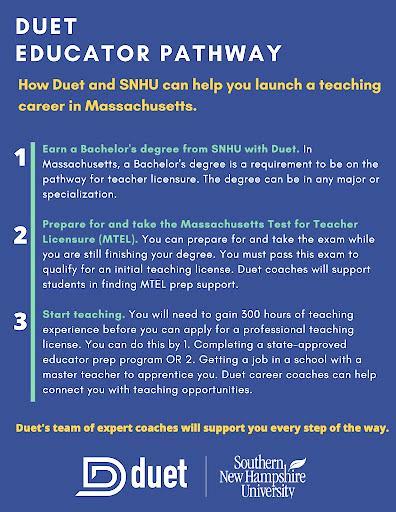 Darlene Reyes is a first-generation Salvadoran-American and alumna from Northwestern University. After graduation, Darlene became an AmeriCorps member for City Year, Washington, D.C. (CYDC), which motivated her to pursue a career in education. She is a 2019 Fulbright U.S. Student Program Fellowship Alumna who was selected to conduct research on the Imposter Syndrome in Brazil within Higher Education. Her first language is Spanish, and she has a high proficiency in Portuguese. Darlene is an advocate for educational equity and passionate about holistic solutions for students of all backgrounds, especially students with layered identities such as students of color, first-generation, and low socioeconomic backgrounds.

Debunking Deficit-Centered Views of Our Children

Dr. Gholdy Muhammad is the author of Cultivating Genius: An Equity Framework for Culturally and Historically Responsive Literacy. In this post, she shares her thoughts on how educators can shift away from deficit-centered views in their own teaching practices.
Everett High School’s College & Career Center
The College and Career Center is a place that aims to assist students in setting a path for themselves beyond high school. The Center will guide students with the college selection and application process as well as identifying appropriate school-to-career paths. We aim to empower all students with the knowledge to make informed decisions on their post secondary plans.  Our vision is a program that will support all students, enhance retention,  and encourage everyone to take full advantage of the educational opportunities offered by Everett High School.

We are located in room 2615 formerly known as the "Great Room" at EHS. We look forward to meeting with all of our students. The center is available for tours for middle and elementary students to begin their post secondary journey. For more information contact: Ms. Walls,
Ms. Buonopane, or Ms. Linehan.

The following terms and definitions are often associated with and provide a common, working language for ADL’s educational anti-bias programs and resources. The definitions are written for older youth to adult reading levels, unless otherwise specified, and some include age-appropriate versions for younger ages.

The EPS is working around the clock to provide a safe, respectful and welcoming environment for all. We want everyone in the EPS to exist harmoniously, free of harassment, microaggressions, bias, or discrimination in any form. If you are experiencing inappropriate or unwelcome comments or behavior from another student, staff member or adult, please reach out to our Office of Equity. Please see the image below that helps students, staff and families indentify their point of contact when experiencing any bias, discrimination or violation of their civil rights. Please email me with any questions. 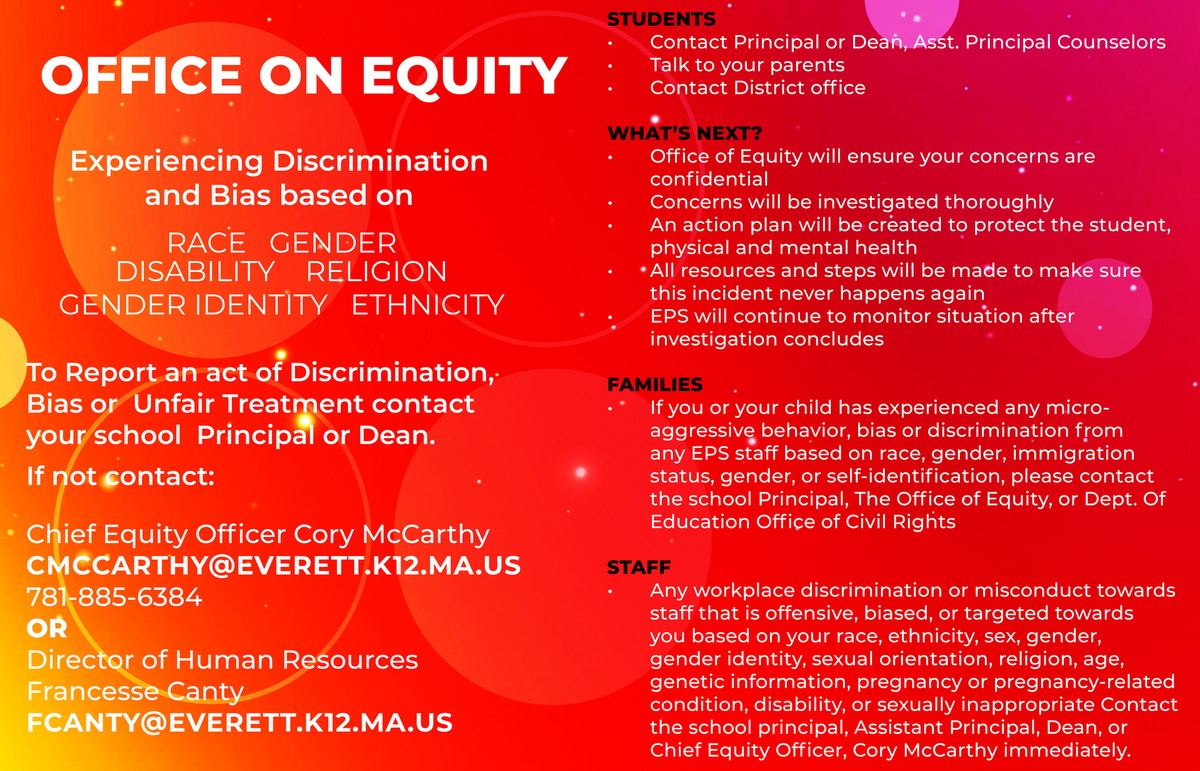 Please fill out our reporting form if you believed you have witnessed, seen, experienced or possess some knowledge of any sexually inappropriate behavior or any biases within the Everett Public Schools. Upon completion, this report will go directly to the EPS Office of Equity. Once the Office of Equity has received this completed form, our office will evaluate your report and then proceed with what we believe are the necessary steps to ensure that all parties involved are safe and supported.

This form allows for reporters to submit written documentation. The identity of the reporter will be kept confidential and the details shared in this form will not be shared unless required by law or given permission by the reporting party. We want to ensure that all reporting individuals are protected to the best of our ability. If you are not comfortable with filling out this document, please email Chief Equity Officer Cory McCarthy. Once this form is completed, a member of the Office of Human Resources or the Office of Equity will contact you within 48 hours. If this is an emergency that requires immediate assistance, call 911.

KING
“The function of education is to teach one to think intensively and to think critically. Intelligence plus character — that is the goal of true education.”
- The Purpose of Education, 1947 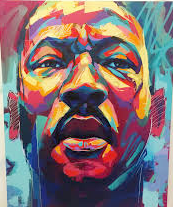 Celebrate MLK by taking a self guided virtual tour of the National Civil Rights Museum. Hit the explore button and use the YouTube 360 Degree and click and drag options. I am overwhelmed by how fantastic this is. If Dr. King is more than a holiday to you, share with your family, students, friends and community.